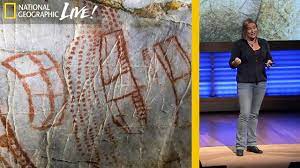 When it comes to European Ice Age cave art, researchers have primarily focused their attention on the animal and human art, largely ignoring the geometric signs found to the sides of these beautiful paintings. At most sites, the geometric signs outnumber the animal paintings by two to one. That intrigued Genevieve Von Petzinger, a 2016 National Geographic emerging explorer. What could these rarely studied signs mean? Von Petzinger takes the stage to talk about her passion for exploration and her quest to uncover the hidden meaning behind these markings.