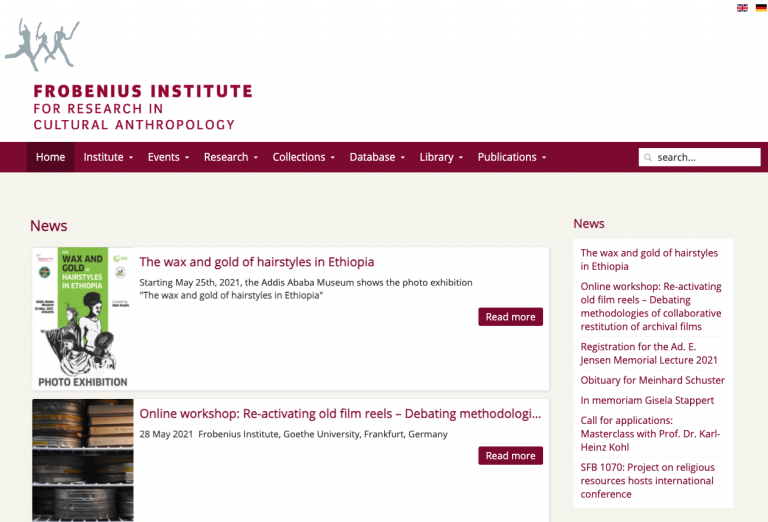 The Frobenius Institute was one of the earliest research institutions for rock art in the world. With its 8,300 copies of rock art from Africa, Oceania, Australia and Europe, the Institute holds one of the largest and most extensive documentary collections of this form of art. The significance of this archive lies particularly with the age of the copies – they were produced between 1912 and the 1960s – and the (regional) comprehensiveness of the materials. In many cases the copies produced by the members of the Institute are now the only remaining documentation of certain rock art sites, as the original sites have since been destroyed.
Contact: Dr. Richard Kuba

zeichner1Leo Frobenius considered “rock art” to be not only an early form of art, but literally a form of primeval or primordial cultural “document”, which in his view said more about “culture” than any historical or archaeological record. His interest in rock art began to materialise during his early travels in Mali, during his “expedition” of 1907-9 to what was then known as “Western Sudan”, where he also took some photographs. Later, while travelling in the Atlas Saharien and South Africa, among other places, he regularly employed painters and illustrators to copy rock art on site. His original and more restricted focus on African rock art was later extended and came to include original sized tracings, drawings, paintings and photographs of rock art from Norway, France, Italy, Spain, New Guinea and Australia: altogether 8,300 copies, the largest of which measure up to 2.70 x 10.50 metres.

fba 1622Before WW II parts of the rock art collection were exhibited both within and outside Germany. The exhibitions in Paris, Brussels, Amsterdam, Zurich and New York appeared to have been quite celebrated events and to have inspired the work of certain contemporary artists. After a successful exhibition in the New York Museum of Modern Art in 1937, the rock art copies toured 31 locations in the rest of the United States. As in Europe these exhibitions provided visitors with an opportunity to experience a truly unusual form of art at first hand.In 2006, the German Research Foundation (DFG) allocated funding to the Institute for the digitisation and cataloging of the pictorial archive materials (including the Rock Art Archive), which are now accessible via an online database.