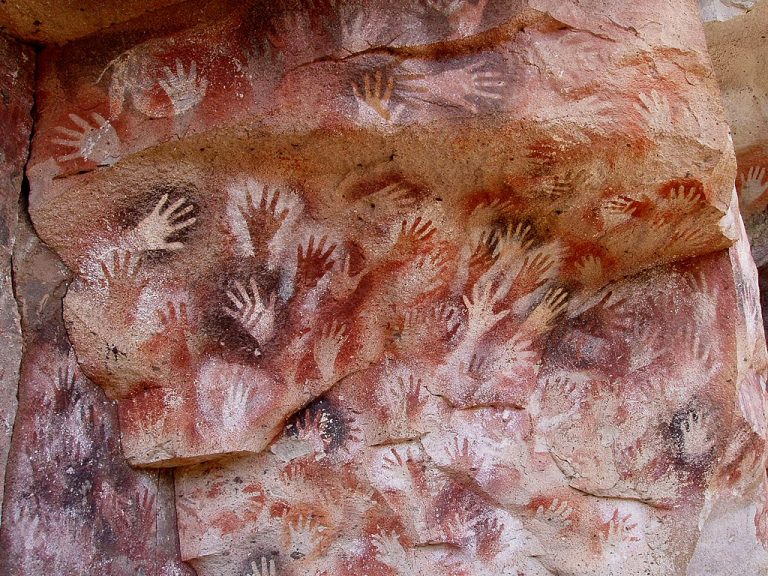 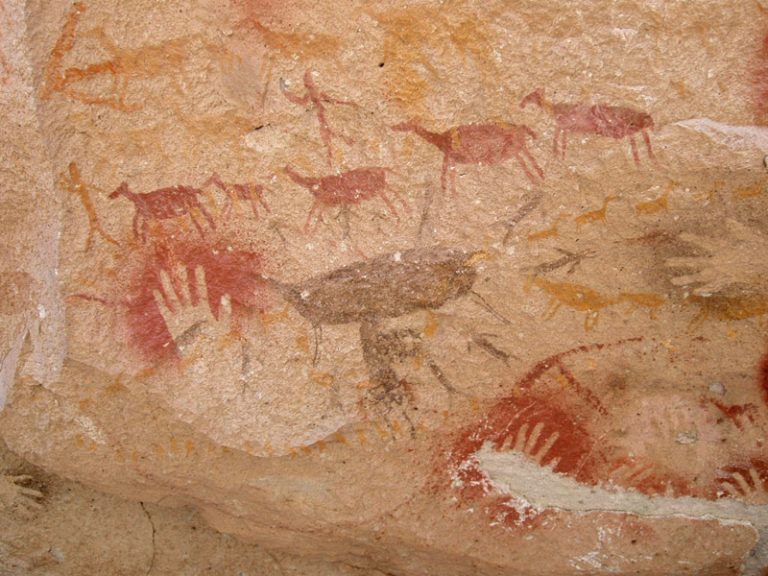 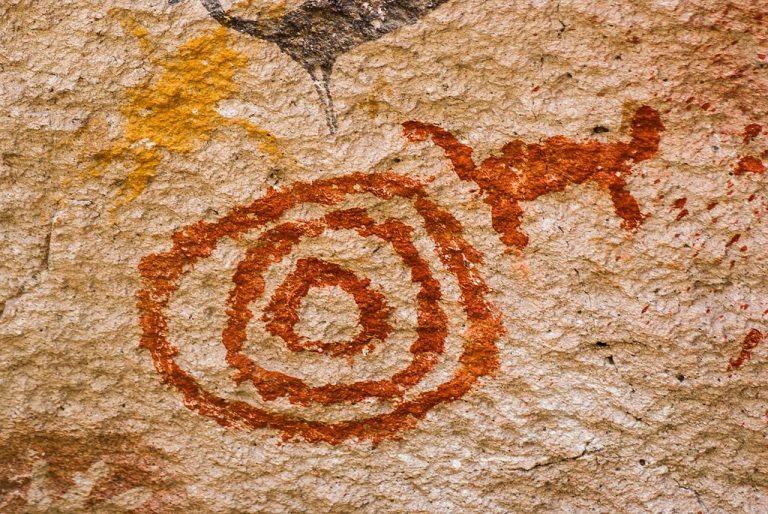 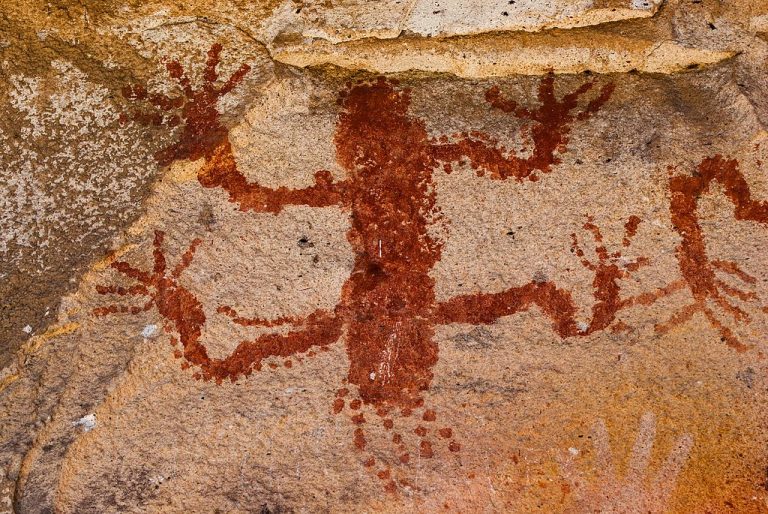 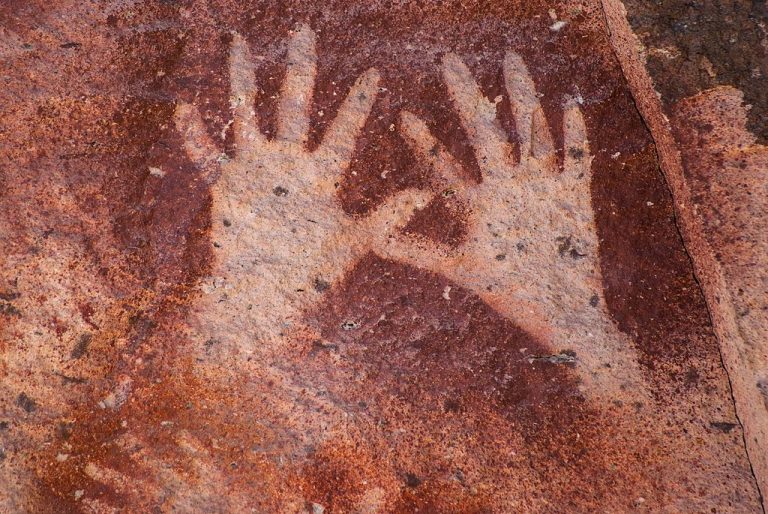 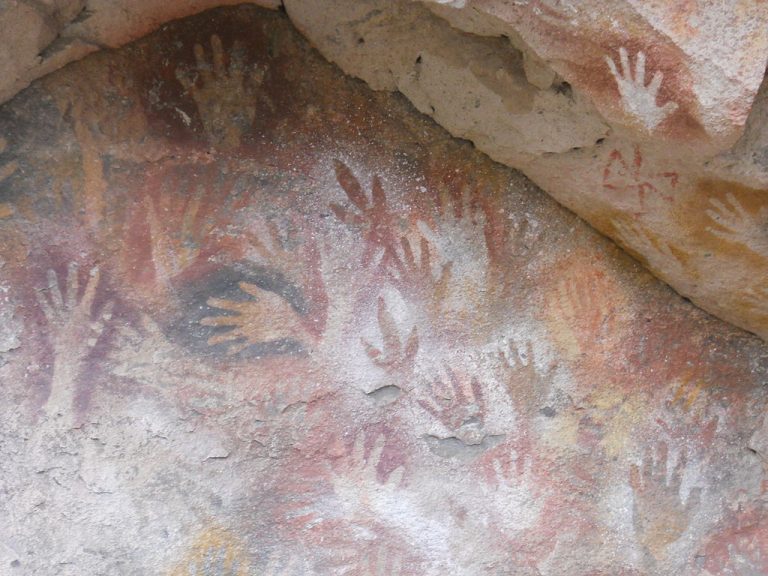 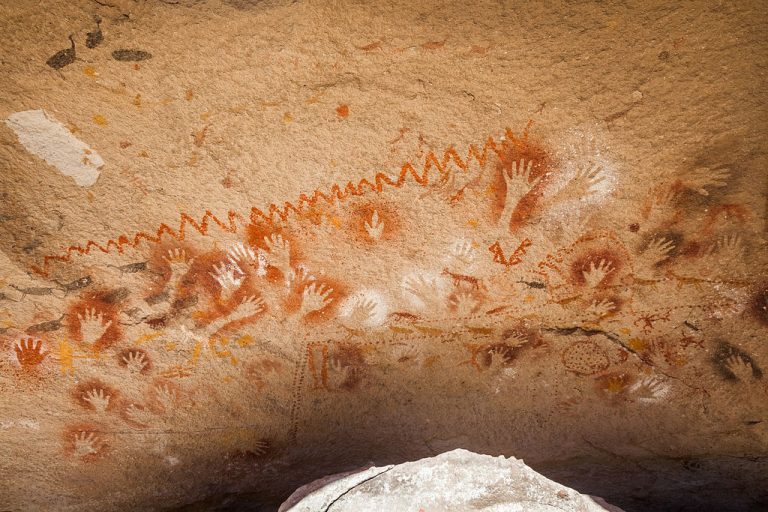 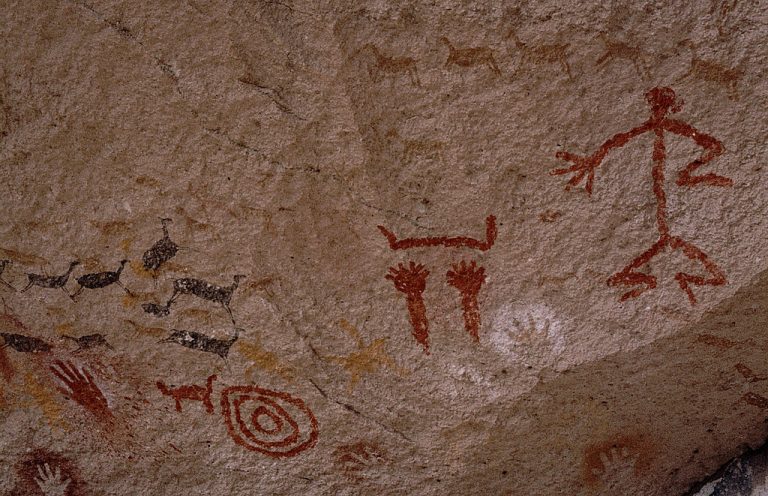 Paintings of a humanoid, guanacos, hands, and concentric circles

by Reinhard Jahn, Mannheim / nanosmile and one more author 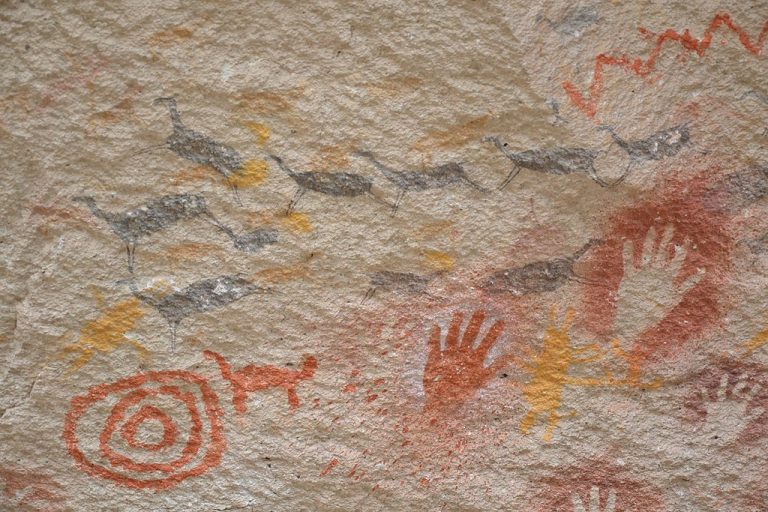 Dynamic, black guanacos in running motion, typical of style A2

by Carlos Zito and one more author 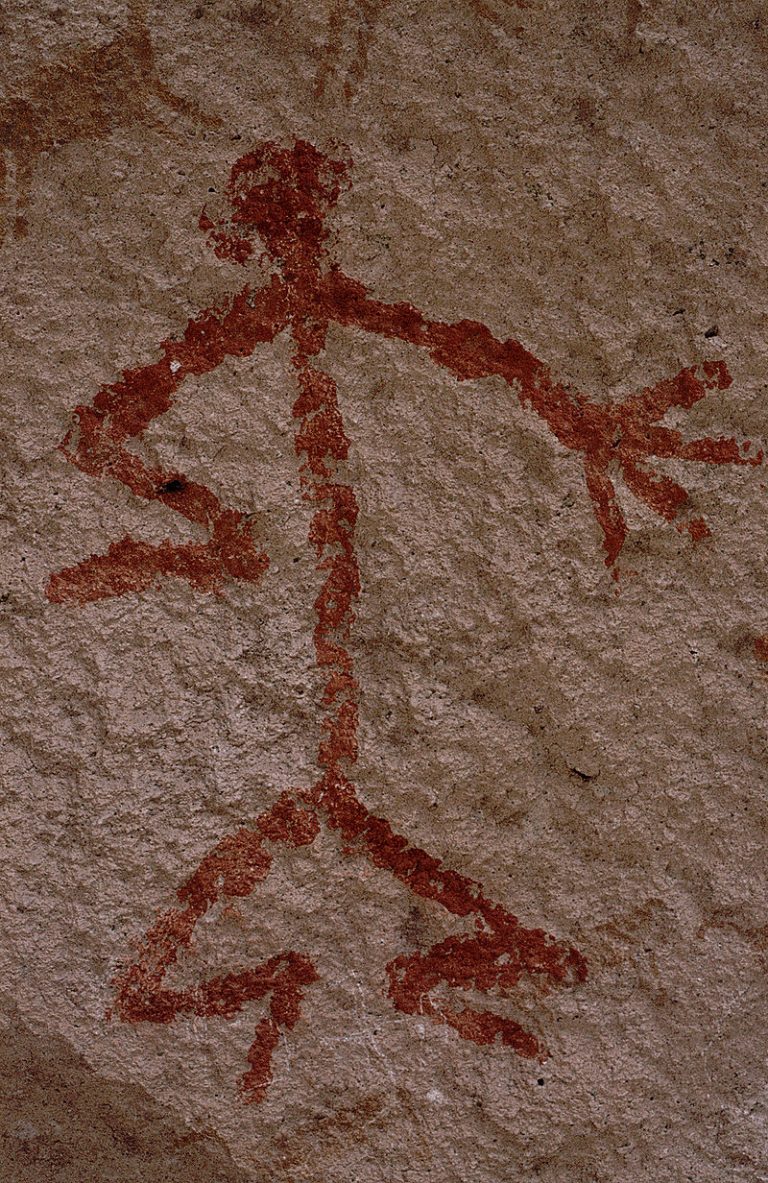 by Reinhard Jahn, Mannheim and one more author 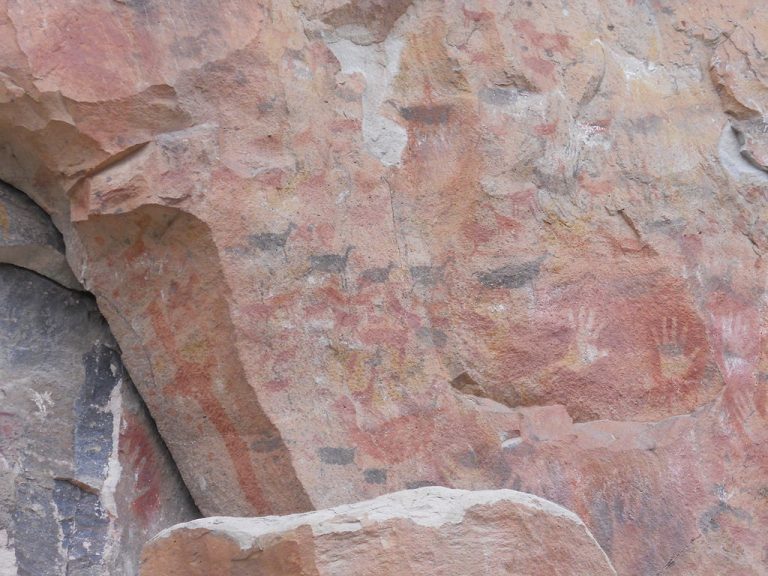 by Maclemo and one more author 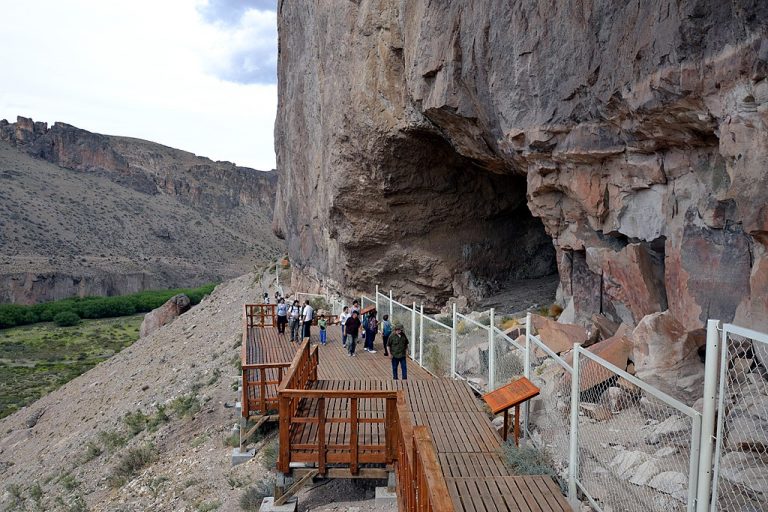 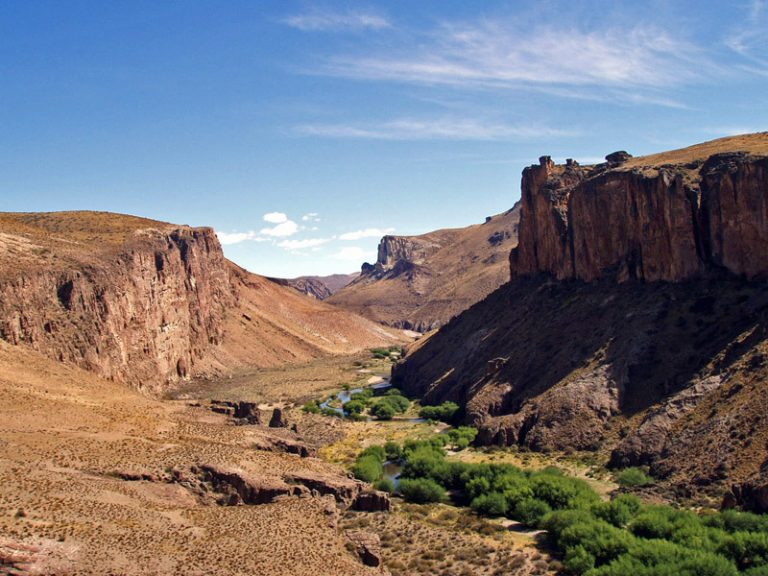 Pinturas Canyon, view from the caves

Cueva de las Manos (Spanish for Cave of the Hands or Cave of Hands) is a cave and complex of rock art sites in the province of Santa Cruz, Argentina, 163 km (101 mi) south of the town of Perito Moreno. It is named for the hundreds of paintings of hands stenciled, in multiple collages, on the rock walls. The art was created in several waves between 7,300 BC and 700 AD, during the Archaic period of pre-Columbian South America. The age of the paintings was calculated from the remains of bone pipes used for spraying the paint on the wall of the cave to create the artwork, radiocarbon dating of the artwork, and stratigraphic dating.

The site is considered by some scholars to be the best material evidence of early South American hunter-gatherer groups. Argentine surveyor and archaeologist Carlos J. Gradin and his team conducted the most important research on the site in 1964, when they began excavating sites during a 30-year study of cave art in and around Cueva de las Manos. The site is a National Historic Monument in Argentina and a UNESCO World Heritage Site.